Point of No Return

We are a mature guild of friends and family with little tolerance for drama. We seek people for all types of content from leveling alts, new mains, normal, heroic, and mythic+ dungeons and raids at all types of levels. Are you new to the game? That’s no problem we have plenty of people who are always willing to help guide you along and lend a hand!

We are a positive guild that has two types of groups running end-game content. We have our casual fun group where everyone is invited to participate and create new bonds of friendships.

We also have the semi-hardcore side of the guild who like to push content to the best of their abilities. Our Semi hardcore group will always clear heroic raid and progress into mythic with the end goal of downing as many bosses as possible within our scope of raid days. Although this is available to anyone we do require tryouts to join this group. And if you don’t make it that’s fine we give recommendations and ways for you to become better and the possibility to try out` again when you’re ready.

If you like to push PvP we are growing our PvP groups with guild Rbgs and arena teams. If you’ve never tried PvP this could be a fun and exciting way to branch out into another part of the game.

When we have our downtimes we do like to go guild achievements and farm some mounts together.

We are looking for driven individual who want to progress in whatever aspect they like the most in the game.

WORLD 3,115
AMERICAS 1,179
REALM 2
Sepulcher of the First Ones
Sanctum of Domination
Castle Nathria

This team consists of members that participate in Progression Raiding Content, whether Heroic or Mythic.

We are looking for like-minded and dedicated DPS to push the guild further into Mythic Castle Nathria! We've cleared Heroic and do Normal/Heroic weekly for our Casual team (where all are invited). 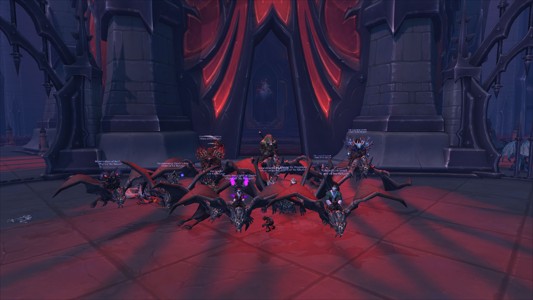